Many people misapply the term barbecue/BBQ. Many refer to it as anything cooked on a grill, or even in the oven if a spicy tomato based sauce is applied. Barbecue is not a dish, or a cooking style, it is a method of cooking.There is a distinct difference between grilling and barbecuing. Grilling is done over the direct heat of a fire. The object is to sear the outside and concentrate the juices on the inside. The grilled flavor is caused by the searing, or browning, of the outside of the food. The process is similar to that which forms the brown crust on a loaf of baked bread.  Barbecue on the other hand is the process of cooking meat at low temperatures for long periods of time. It is using indirect heat with maybe a final touch over flame.  I can mean using a sauce during or just as a finish or using nothing but a rub.

There are generally four distinct approaches to BBQ cooking.  These are known by the geographic area in which they are held by reputation to have been invented.

Carolina barbeque is primarily Pork as much as Texas style barbecue is beef.  What kind of pork, you ask?  Pretty much all but the squeal, from pork butt (actually the pork shoulder) and ribs, all the way up to the whole critter done in a pit.  Not much if any of a rub is used; this barbecue is sauce-based.  Carolina sauce in general is thin and watery, tangy, and peppery.  Depending on the Carolina region you’re talking about, the sauce can be golden yellow from the mustard base, or clear and vinegar-based and it might contain

floating flecks of cayenne.  Being tangy from the vinegar, the sauce cuts through the fat in the ribs and butt and soaks into the meat while cooking.

​Texas barbeque focuses on beef.  Might be a little chicken or pork ribs tossed in as sort of garnish, but in general it’s beef, beef and more beef.  No squeal, no cackle.  Beef brisket, and beef ribs, cooked with a dry mustard and chili powder-based rub.  Sauces tend to be thin and bold, more like a basting or mop sauce and are heavy with flavor from various kinds of ground chilis, cumin, onion, hot sauce, meat drippings and even beer or coffee.  If you want your barbecue “wet” then the meat gets dunked into the mop bucket of sauce prior to plating.

Check out the Recipes we have tested and loved. The Sauces as well as the Rubs.
Page four has Veggie recipes for sides and vegetarians. Page five has BBQ tips about the wood, coals and heat application
Enjoy...and just ignore it if a little sauce gets on your shirt! 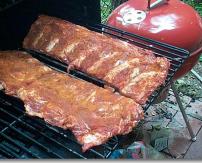